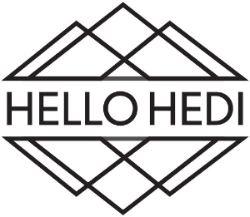 Hedi Kyle, as many of you know, is a great friend of the book arts community whom I've had the privilege and benefit of knowing for many years. This tribute exhibition was assembled by Laura Russell, the owner of 23 Sandy Gallery. There is a short biography of Hedi and an online catalogue of the exhibition available on the 23 Sandy Gallery website.

This invitational was curated by David C. Terry, NYFA Director of Programs and Curator (and NYFA fellow in Sculpture '99) to celebrate 30 years of the Artist's Fellowship Program. I received  a fellowship for photography in 1986, and two for artists' books (1990 and 2011). I served on the artists' advisory committee to the NYFA Board from 1994-1999, so am indebted to the program for much support and education over the years.

This book gathers small works I created for an annual fundraising project to benefit The Rochester Contemporary Arts Center, a nonprofit arts organization in Rochester, NY. The 6 x 6 inch format is a great way to sketch out ideas as well as support this regional artists space. 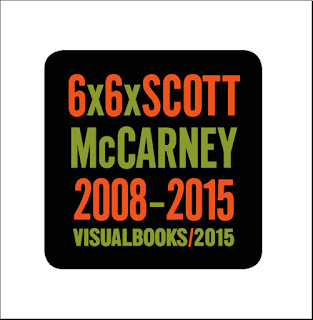 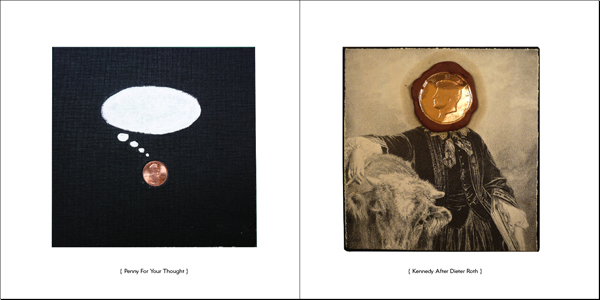 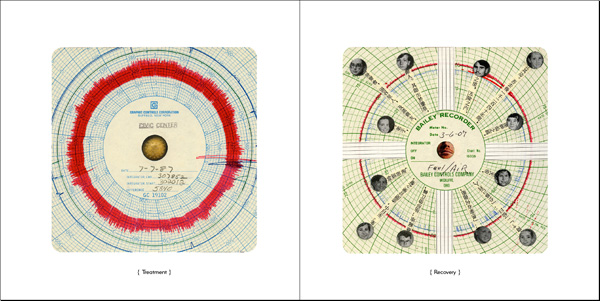 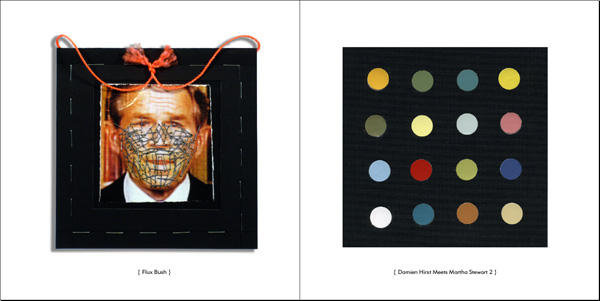 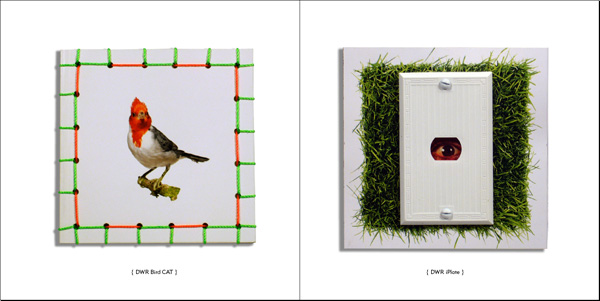 One of a series of alphabet books that rely on physical action (cutting paper and turning pages) to create letterforms unique to the book form. The fore edge of each page is cut into geometric forms from black, white and cream toned duplex stock (two sheets of different colored paper laminated together). The conception of the series and design of inkless alphabets was inspired by the limitations and possibilities of material and process. 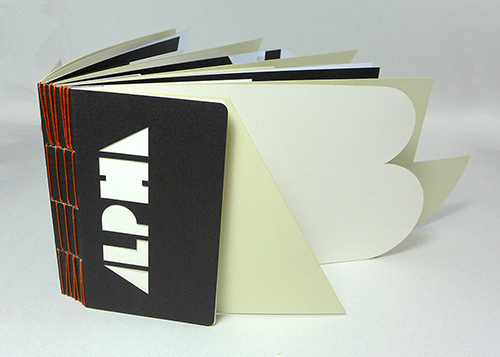 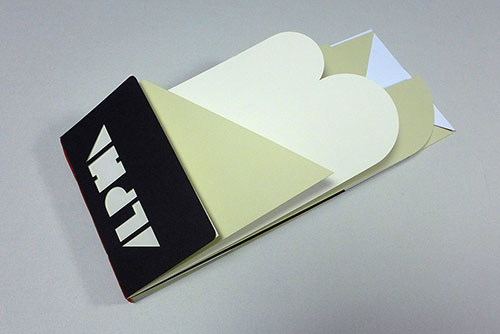 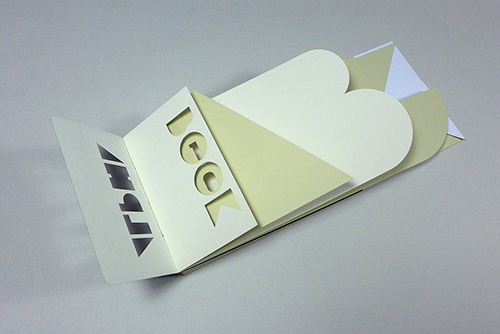 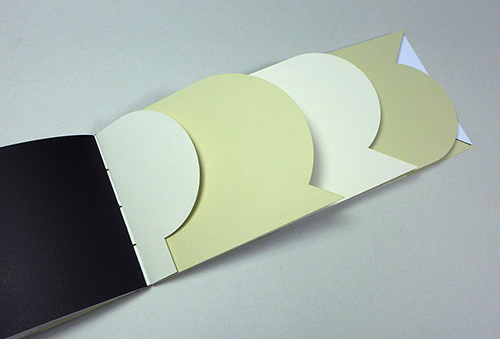 A "panagram" is a sentence or verse that contains all the letters of the alphabet. Panagram utilizes the letterforms of Alphabook 10 to render a pangram tailored to the book format. 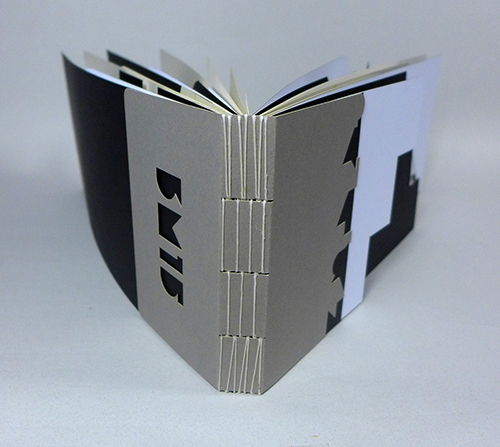 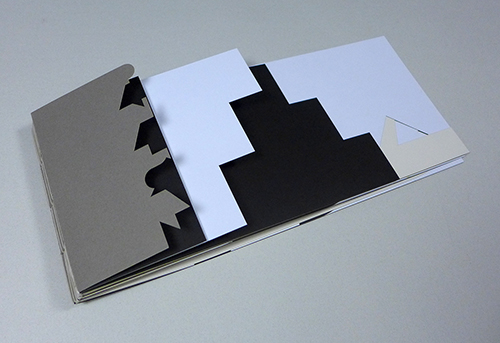 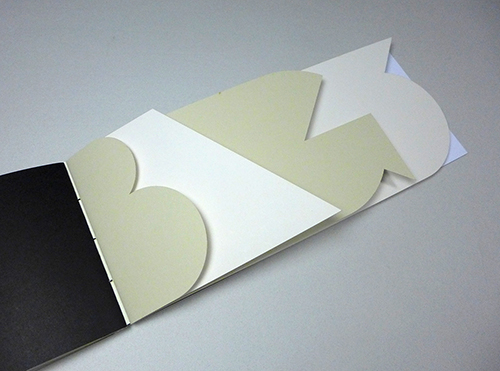 *Both Alphabook 10 and Panagram were executed during my residency at The Institute for Electronic Arts, a high technology research studio facility within the School of Art and Design, NYSCC, Alfred University, New York, committed to developing cultural interactions spurred by technological experimentation and artistic investigations.

This is the collaborative effort skúta and I made over the past year on the invitation of Brad Freeman to be included as part of JAB38. skúta and I have been friends for 35 years. In July 2014 I made my first trip to Iceland, skúta's homeland. Over the course of 10 days, I  observed skúta in his native habitat while he introduced me to Reykjavik and nearby environs. skúta, having lived away from Iceland for many years, embodies the dual experience of being both a tourist and a native of Iceland. During our stay we photographed in each others company as well as independently. We shared our photographs to make this book.

I utilize the pattern from the mirrored ceiling of Harpa music hall, designed by Ólafur Elíasson, to frame skúta's Icelandic experience in the context of our friendship. skúta chose the pattern of the traditional Icelandic sweater to knit his images and Scott's first impressions into collages that reflect his dual status. 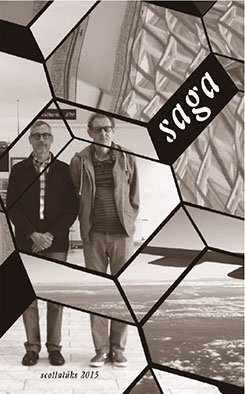 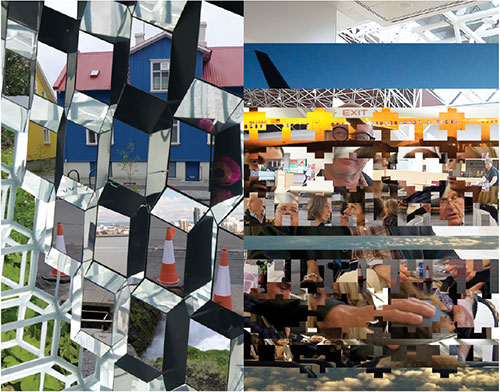 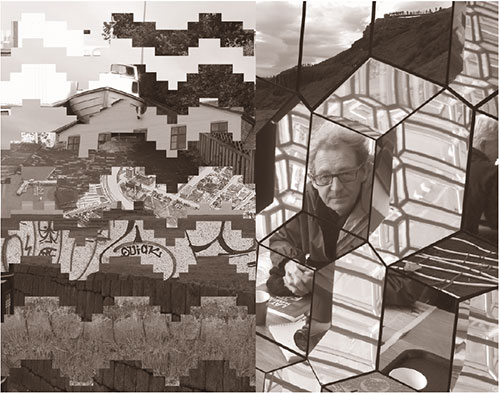 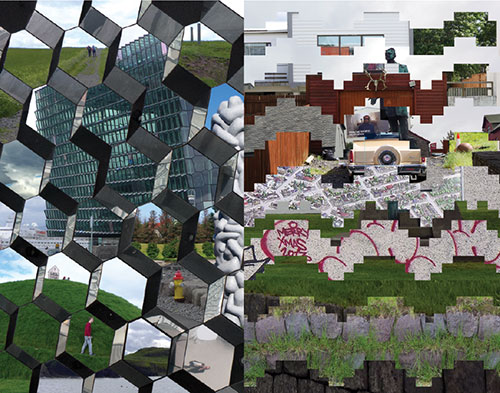 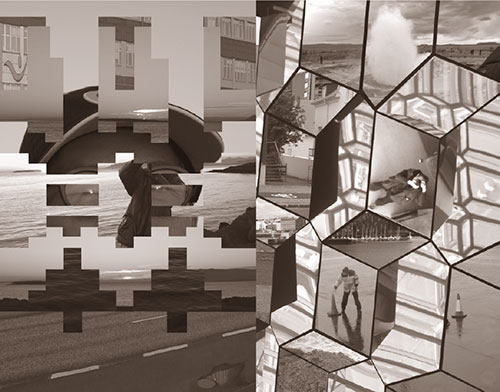 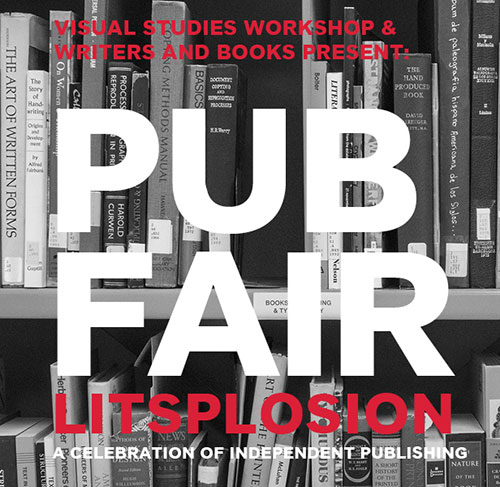 The BEST book fair devoted to independent publishing in Rochester hits its stride as a three-year old. (Okay, the only, but still the best.) The third annual Pub Fair showcases the gamut of what publishing can be. Artist’s books, photobookworks, magazines, zines, digital publishing as well as resources for all of these will be on hand to peruse and purchase. In addition, Writers & Books presents Litsplosion, a collection of award-winning writers, emerging voices, and regional talents to engage audiences with stories and poems that range from the socially conscious to the wildly surreal. Plus food trucks on the lawn and beer inside! More info here!

Posted by Scott McCarney at 3:15 PM No comments:

No secret the winter here in the North East has been a bear. Cayuga Street has been renamed Cayuga Canyon as we search for new places to pitch the snow. Plenty of time to reflect on past efforts and prep for upcoming opportunities. 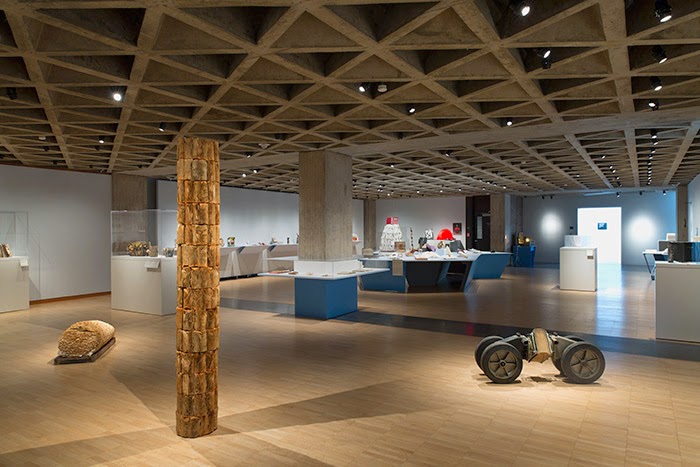 Odd Volumes showcased a selection of experimental and innovative works of book art from the 1960s to the present, drawn from a major collection given to the by Allan Chasanoff. The collection was assembled by Allen with the independent curator and artist Doug Beube, a fellow graduate of VSW.

The student-curated exhibition considered the transformation of books into sculptural objects from multiple perspectives: the history of book art, the relationship between form and content, and the interaction between the viewer and the work. It was beautifully installed with most of the work displayed on tables and shelves without the interference of glass walls or plexiglas bonnets, restoring an intimacy to the work robbed by protective displays.

The exhibit gave me the overall impression that the codex peaked as a cultural metaphor at the end of the 20th century, though the corpus of the object (it's paper, board, printing and collectivity) is still rich for mining. Text has moved on to new millennial devices. 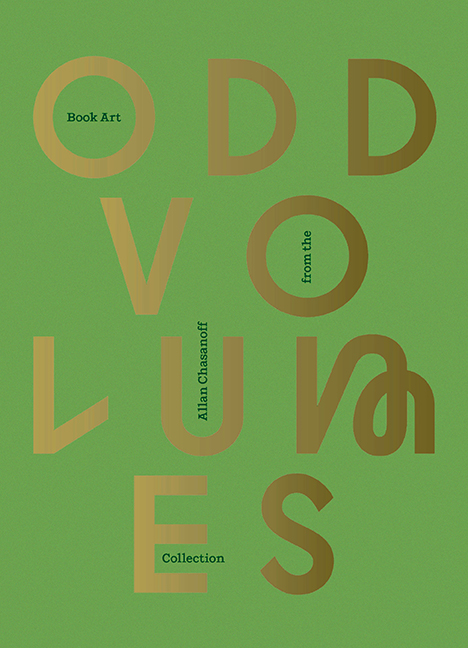 The catalogue for the exhibit is stunning, taking a dos-a-dos format which combines the complete illustrated checklist of the exhibition in one volume with essays and interpretive photographs of the work on display in the other. An introduction by Gallery director Jock Reynolds* considers the book’s changing role in society and is followed by several brief essays that explore the transformation of books into sculptural objects from multiple perspectives. 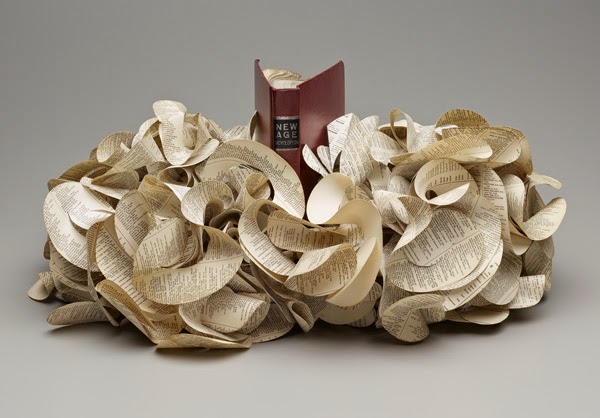 *On a personal note, the two pieces of mine that are part of the Chasanoff collection were made while I was a resident at the Washington Project for the Arts in 1989 when Jock was the director. What goes round comes round . . .

Cover to Cover: a Discussion among Book Artists
was a panel discussion organized by the student curators that brought together  artists who were exhibiting in the "Odd Volumes" exhibit and "CT (un) Bound", a companion exhibition at Artspace in New Haven: Marion Belanger, Jessica Drenk, Chris Perry, Yo Yarrington and Doug Beube, who moderated the panel. Brother Hugh attended, a retired professor of communication. He's been to my shows before, but I don't think he has ever heard me speak about my work in public. I think he gave me a pass, and sent me this pic from his iPhone: 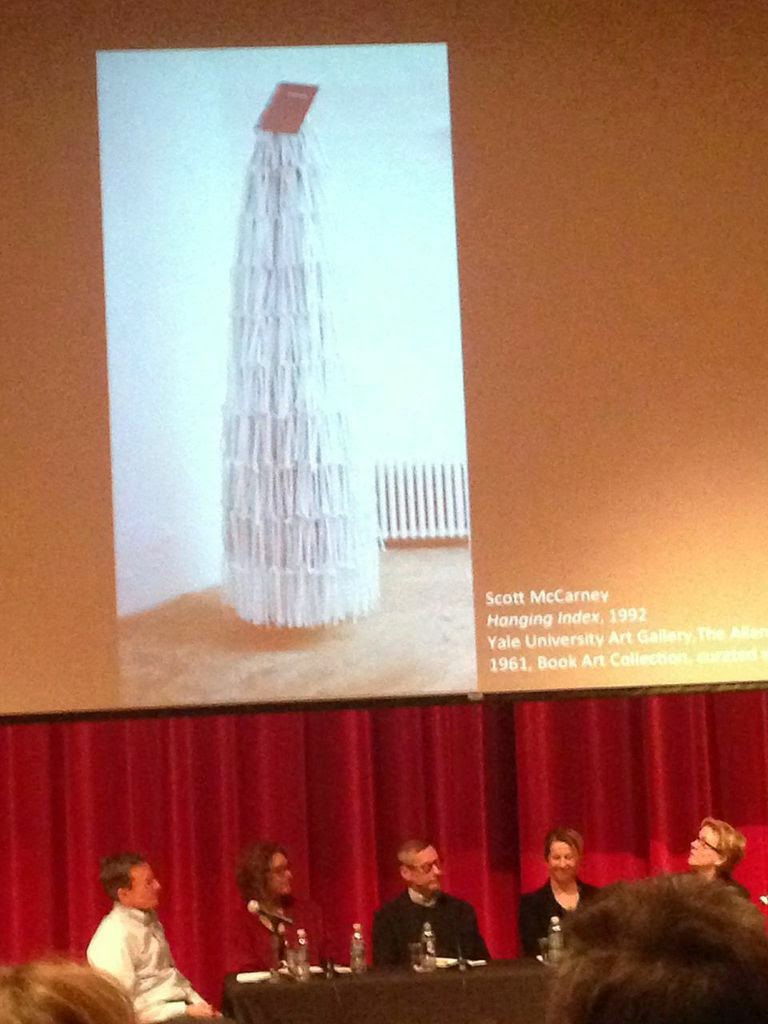 I'll be an artist in residence at the Institute for Electronic Arts in June  2015. I propose to utilize their digital image making and laser cutting facilities to revisit and extend my early experiments in paper engineering-as-imagemaking. I'm excited about the opportunity to experiment with laser cutting as my personal digits (fingers) are not as agile as they used to be.

The Institute for Electronic Arts is a high technology research studio facility within the School of Art and Design, NYSCC, Alfred University, New York, committed to developing cultural interactions spurred by technological experimentation and artistic investigations. 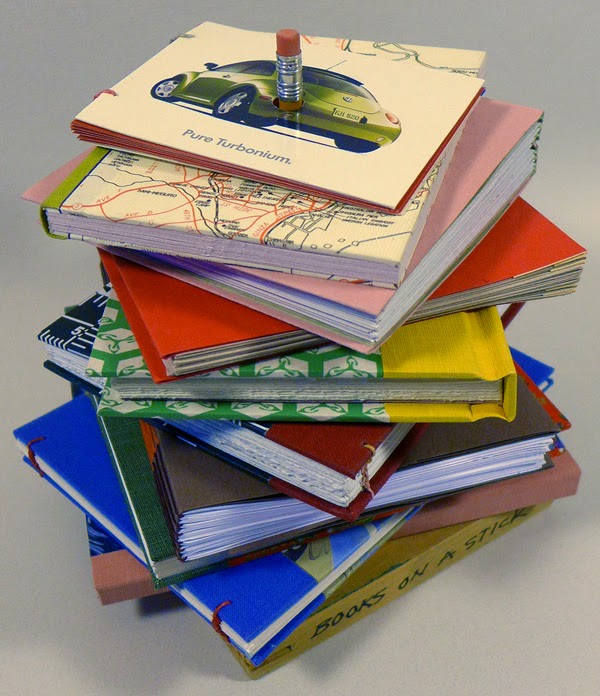 I'll be teaching a bookbinding workshop geared towards photographers for the 2015 VSW Summer Institute. This workshop introduces physicality and engineering into the vocabulary of photobook making. It's as much fun to teach as it is to take. Spread the word!

The RIT Cary Graphic Arts Collection will commemorate the 150th anniversary of the birth of Frederic W. Goudy with a celebratory keepsake exchange coinciding with a Goudy 150th anniversary exhibition at the Cary Collection in Rochester. I worked with two versions of a quote attributed to Goudy, interleaving the lines to be read like the Joker in a deck of cards: 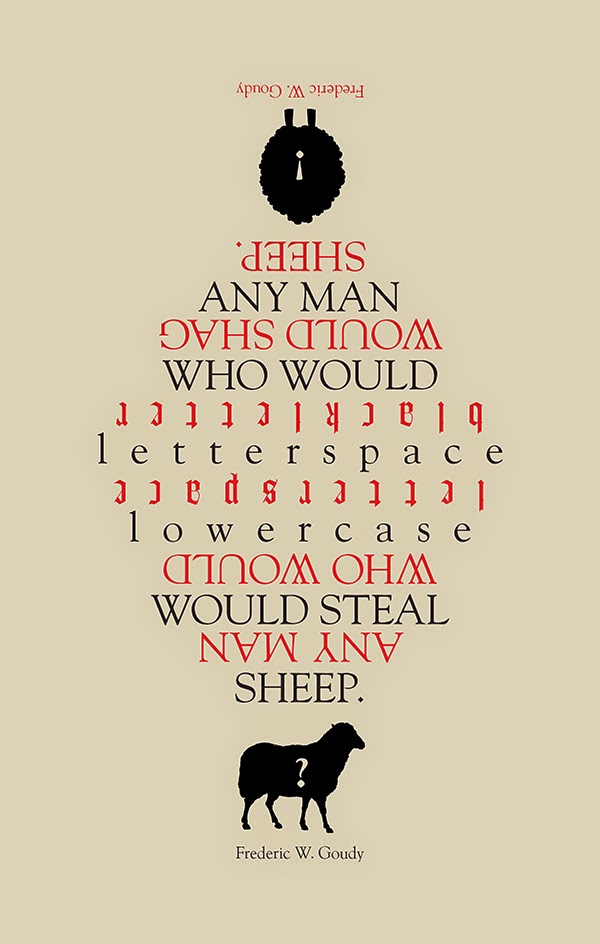 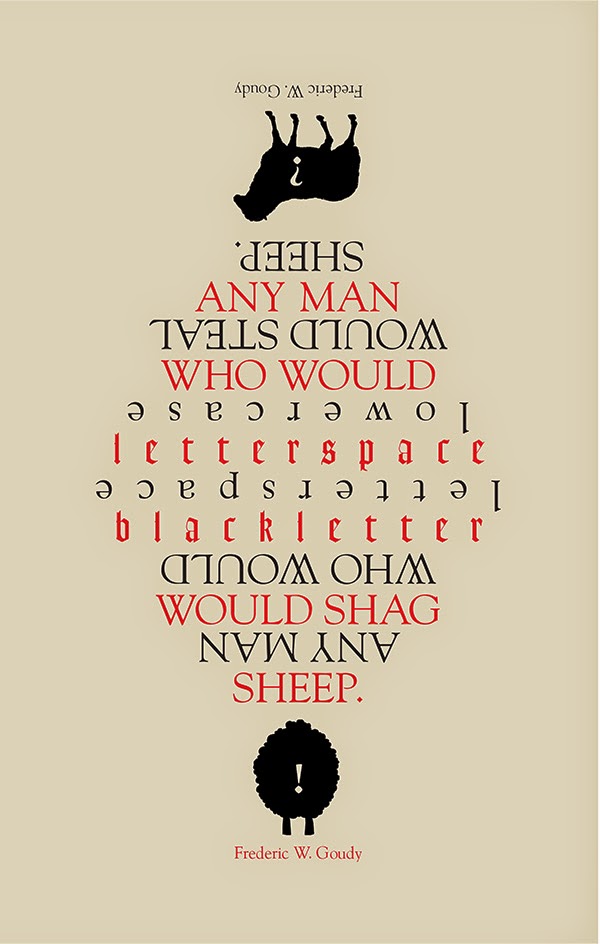 Skúta Helgason and I are collaborating on a book for JAB, the Journal of Artists Books, which should appear later this year in JAB 38. Skúta and I have been collaborating since we were grad students at VSW in the '80s. We're using "ScottatúkS" to denote our efforts and exhibit together under that moniker at the New York Art Book Fair. A photograph on the back cover of JAB 36 was made by Brad Freeman, JAB Founder and Editor in Chief, at a dinner where we sealed the deal after the Book Fair last October. 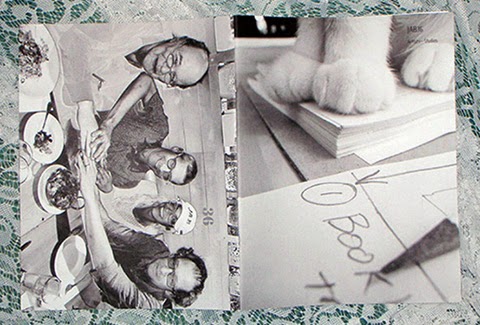 Posted by Scott McCarney at 6:50 AM 3 comments: